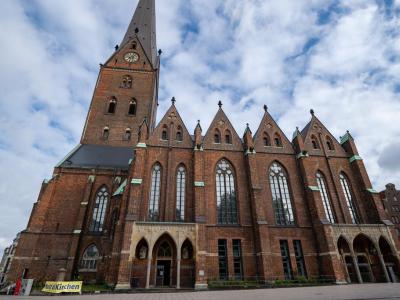 A cathedral has existed on this site for centuries. Records indicate that St. Peter's was built in the late 12th century before being rebuilt in the Gothic style during the 1300s. The most important St. Peter's artifacts are the bronze lion-head door handles, which date to 1342.

St. Peter's Church was heavily damaged in the Great Fire of 1842. However, many of the artworks, including the lion-head door handles, were saved.

Inside the church, visitors will find many important artworks. A 1460 Gothic mural shows the church's first bishop, Ansgar of Bremen. A statue created in the late 1400s also depicts Ansgar of Bremen. Two 17th century Gottfried Libalt paintings, Jacob's Dream and Christ's Birth are on display in the cathedral.

Another important painting is Christams 1813 in St. Peter's. This painting depicts the Hamburg citizens locked in the church for refusing to feed Napolean's occupying troops.

Visitors are welcome to climb the 544 steps to the church's viewing platform. This is the highest viewing platform in the city, and guests can look out over the city center, Alster Lake, and the port.
Image Courtesy of Flickr and Carandoom.