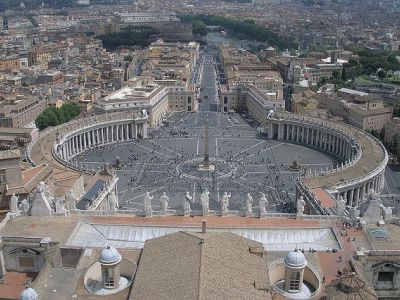 Saint Peter’s Square is the most famous square in the world. It is also an architectural and engineering masterpiece and no visitor to Rome should miss visiting it.

The square was redesigned between 1657 and 1667 by Gian Lorenzo Bernini, who was already working on the Basilica. Pope Alexander VII wanted the piazza in front of St Peter’s Basilica to be a place where everyone could see him, but not too grand to distract from the Basilica itself.

Bernini designed the square to be partially surrounded by curved and covered colonnades, 196 metres wide and 148 metres long. The colonnades are supported by 284 Doric style columns set in four rows. On top of each colonnade are statues of various martyrs and saints.

Pope Sixtus V had the obelisk in the centre of the square moved here from the Circus of Nero in 1586 by Domenico Fontana. In 1817 circular stones were laid to mark the shadow of the obelisk’s tip at noon.

The cobblestone paving is broken up by travertine lines radiating out from the obelisk. At each end of the colonnades stands a fountain; one was built by Carlo Maderno in 1614, the other by Bernini in 1667. Between each fountain and the obelisk, you will see a round slab of porphyry. If you stand on one of these slabs and look at the columns, you will be struck by a startling optical illusion: it seems that there is only one row of columns instead of four!

The square is the focal point of pilgrimages and over 300,000 people gather here every year to hear the Pope’s Easter speech. Three flights of steps lead from the square to the Basilica.

Why You Should Visit:
The architectures surrounding the square are simply amazing. It is also a great place for taking pictures, even if you do not plan to walk into the Basilica or the Vatican museum.
Image by Argenberg on Flickr under Creative Commons License.
Sight description based on wikipedia