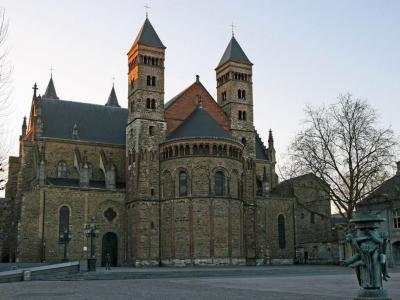 St. Servatius, also known as St. Servaas Church, is the most famous religious building in Maastricht. It was built on the site of St. Servatius’ grave. The building’s architectural style is Romanesque but some Gothic elements were added later. The church is located at Vrijthof Square and was erected between the 11th and 13th centuries. Its Bergportaal, built in the 13th century, was the first Gothic construction in the city. It also has a Gothic tower, which was constructed in the 16th century. The interior is richly adorned and is worth seeing.
Image by Michielverbeek on Wikimedia under Creative Commons License.

Statues and Monuments Tour of Maastricht