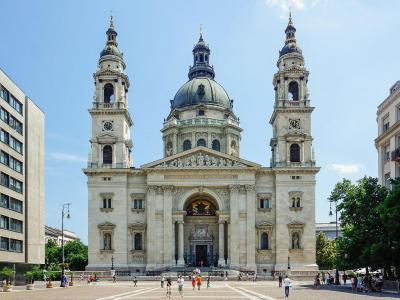 Overlooking the eponymous square in Budapest, the St. Stephen's Basilica is dedicated to King István, the first monarch of Hungary, who brought Christianity to the country. The mummified fist of the king, now aged over 1,000 years, is kept right here in the church, as a relic encased in a glass box, and is an object of regular pilgrimage from all over Hungary (although one can easily miss it, if not aware). Also interred in the church is Hungary's legendary soccer player, Ferenc Puskás, considered to be one of the best footballers of all time.

For many Hungarians this is the most important religious site, much as it is a key local attraction for tourists, not the least because of its size – the building can hold up to 8,500 people at a time and stands 96 meters high, being the 3rd tallest structure in the country, at par with the Hungarian Parliament, holding the legally allowed height record for Budapest.

To create this Neo-Classical basilica took three architects, including Hungary's finest, Miklós Ybl. Adorned with a bust of St István, right above the doorway, the facade of the building features a huge arched portal with Ionian columns, flanked on both sides with huge belfries. Topping the right tower is the heaviest and largest bell in the country, weighing nine tonnes!

Except for certain parts of the building, such as the treasury and the dome, the basilica is free to enter. Access to the dome, either by stairs or elevator, costs a small fee but allows visitors one of the best panoramas of Budapest. The interior of the church represents a mass of marble and gold plating with elaborately decorated chapels, mosaics, ceiling and wall frescoes, stained glass windows, plus a multitude of statues (including that of St. István himself adorning the ornate main altar) and paintings by renowned Hungarian artists.

Apart from the altar, another distinctive feature of the church is a massive pipe organ to hear which play is a truly awe-inspiring experience. So, if you're a music fan, whenever you get a chance, try to attend an organ concert here – highly recommended.