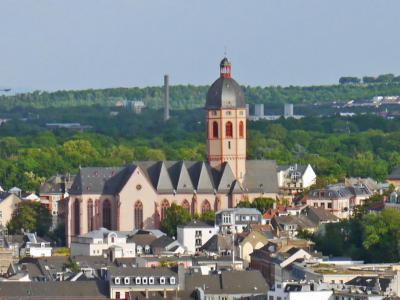 St. Stephen's Church was originally built in 990 on Mainz's highest hill. The current church was completed in 1340 and is the Upper Rhine's oldest Gothic hall church.

The church was originally built by Archbishop Willigis, who also built the Mainz Cathedral. Willigis envisioned St. Stephen’s as the “Empire’s Place of Prayer.” Willigis was buried in St. Stephen’s in 1011.

The church features a nave with two side aisles. The walls have the distinctive red sandstone that is featured in other Mainz buildings.

One of the church's most notable features is the Chagall windows. Marc Chagall, a Belorussian Jewish artist, created nine stained glass windows that depict Christian and Jewish traditions. Chagall fled France during the Nazi occupation and intended his work to contribute to Jewish-German reconciliation.

St. Stephen’s is the only German church that features Chagall’s work. Chagall placed the first window in 1978 when he was 91 years old. He completed the final window shortly before he died at the age of 97. Mainz made Marc Chagall an honorary citizen.

The windows rely heavily on the color blue, and blue light shines throughout the church. They feature angels and Biblical figures moving through the blue light.

In addition, the church has 19 other stained glass windows that were created by Charles Marq. Marq had worked with Chagall for 28 years.

St. Stephen’s houses several other magnificent artworks. A 15th-century painting shows God the Father. There is also a late Gothic sculpture depicting the Virgin and Child with Saint Ann. The baptismal font dates to 1330. St. Stephen’s Gothic cloister is one of the most beautiful cloisters in the region. The cloister was added between 1462 and 1499. Many of Mainz’s dignitaries are buried here, and visitors can see tombstones with coats of arms.
Image Courtesy of Wikimedia and Simsalabimbam.