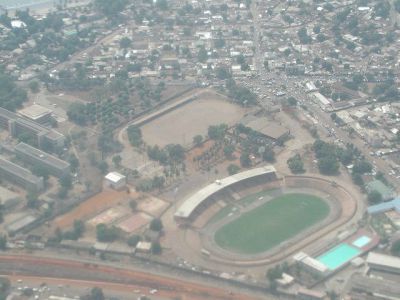 Stade 28 Septembre is a multi-purpose stadium in Conakry. It is currently used mostly for football matches. The stadium has a capacity of 35,000 people. In an attempt to host the 2016 African Cup of Nations (ANC), or Coupe d'Afrique des Nations (CAN) in French, proposals have been made to upgrade or reconstruct the September 28 Stadium to an all seater capacity of 75,000-80,000 people. Currently, a new all seater national stadium, with a capacity of 50,000-55,000, is being constructed in Nongo near Conakry, the capital of the Republic of Guinea.

The Stadium gets its name from September 28. The day Guinea voted famously NO in the French referendum, which ultimately led to the political independence of Guinea on October 2, 1958. Guinea-Conakry (formerly French Guinea) is the first former French colony in Sub-Saharan Africa to attain political independence.
Image Courtesy of Flickr and attawayjl.
Sight description based on Wikipedia.

Want to visit this sight? Check out these Self-Guided Walking Tours in Conakry. Alternatively, you can download the mobile app "GPSmyCity: Walks in 1K+ Cities" from iTunes App Store or Google Play. The app turns your mobile device to a personal tour guide and it works offline, so no data plan is needed when traveling abroad.

Conakry, the capital of the Republic of Guinea, is situated on the Kaloum Peninsula stretching into the Atlantic, and is known, among other attractions, for its beaches, lush palm vegetation and water sport activities. Still, there's more to Conakry than just that, as the city houses a good number of monuments, historic and religious sites, including the impressive Grand Mosque, vast...  view more