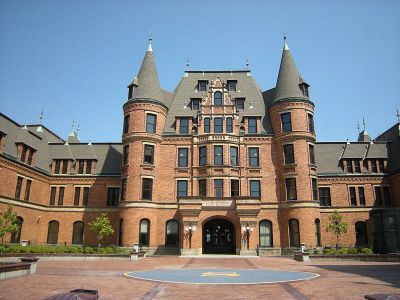 Stadium High School is a 100-year-old high school and a historic landmark. It is part of Tacoma Public Schools, or Tacoma School District No. 10 and is located in the Stadium District, near downtown Tacoma. The original building burned to a shell while it was still a partially constructed hotel designed by Hewitt & Hewitt that was being used for storage. It was reconstructed for use as a school according to designs by Frederick Heath, and a "bowl" stadium was added.

The main building was constructed by architects Hewitt and Hewitt for the Northern Pacific Railroad Company and the Tacoma Land Company at what was then known as Blackwell Point.

The 100 year celebration of Stadium High School was held in September 2006. At the celebration, a Guinness World Record was set for the largest recorded school reunion. 3299 alumni attended.

This sight is featured in a self-guided walking tour of Tacoma, Washington within the mobile app "GPSmyCity: Walks in 1K+ Cities" which can be downloaded from iTunes App Store or Google Play. Please download the app to your mobile phone or tablet for travel directions for visiting this sight. The app turns your mobile device to a personal tour guide and it works offline, so no data plan is needed when traveling abroad.

Create Your Own Walk in Tacoma

Creating your own self-guided walk in Tacoma is easy and fun. Choose the city attractions that you want to see and a walk route map will be created just for you. You can even set your hotel as the start point of the walk.

Set on the banks of Puget Sound, south of Seattle, Tacoma city is a picturesque place. Particularly this is true of Tacoma's Waterfront, a paved sidewalk running along Puget Sound’s Commencement Bay. Much loved by walkers, joggers or those searching for a good place to eat with a view, the Waterfront area holds a number of prominent attractions. This orientation walk will lead you to the...  view more

Tacoma is well known for its historic buildings – most built at the end of the 19th century – among which the Old City Hall stands out most. The more recent addition of the Tacoma Art Museum, and the Washington State History Museum added much life to the downtown area, which is undergoing something of a renaissance. Take this self-guided tour to explore Tacoma's main landmarks along the...  view more

Tacoma is a city that is very rich in culture. There are many museums in Tacoma where you can learn interesting things about the city, its history and culture. There is a large exhibition hall in the city with different temporary exhibitions. This self-guided tour will lead you to the most worthwhile museums and exhibitions of Tacoma.