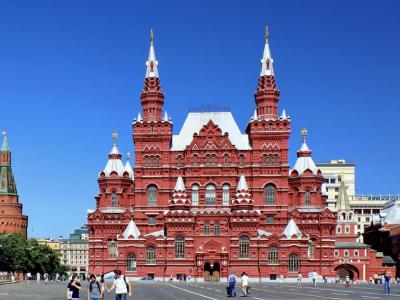 Moscow is known for its great museums and the State Historical Museum surely adds to this reputation. Wedged between Red Square and Manege Square, this red-brick building offers an extensive foray into Russian history, spanning from the ice age right up to the 19th century. Spread over three floors, the diverse collection of exhibits totals more than 4.5 million, including 1.7 million coins (the largest coin collection in Russia), and almost 14 million sheets of documents.

The first floor displays relics of prehistoric tribes that once lived on the territory of today's Russia, exhibits from medieval Rus going back to the Mongol invasions and the consolidation of the Russian state, Russian folk ceramics and more. The second floor is dedicated to the Imperial period, featuring personal items of the royals, furnishings and decoration from the palace interiors, and various artworks acquired by members of the Romanov dynasty and documents from the era. An unexpected highlight is an exhibit addressing the expansion of the Russian Empire by examining the growing network of roads and how people travelled. The third floor houses icons and ancient manuscripts.

The museum was founded in 1872 and officially opened in 1883. The design of the building, featuring Russian Revival style, was done by Russian architect Vladimir Shervud (Sherwood). The intricate interiors, echoing the style of old churches, were decorated by renowned Russian artists: Vasnetsov, Serov, Repin, Aivazovsky and others.

During the Soviet period, the proclaimed gaudy wall murals were plastered over. In between 1986 and 1997 the museum underwent a painstaking restoration back to the original.

Why You Should Visit:
One of the most fascinating and informative journeys through Russia's long and turbulent history. The museum’s collection is second to none in the country.
The restored interiors are attraction in their own right.

Tip:
Leaflets in English are available as you enter the museum.
Get an audio guide, or you'll get lost or overwhelmed, or both (bring your own earphones!).
Guided tours are available for groups of 15 by appointment.

Opening Hours:
11 am through 7 pm, except the first Monday of each month and Tuesdays. On Thursdays from 11 am through 8 pm.
Image by Marcin Konsek / Wikimedia Commons / CC BY-SA 4.0 on Wikimedia under Creative Commons License.