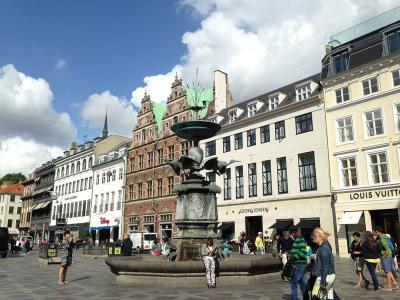 Copenhagen has so many statues, but not that many fountains. The Stork Fountain can be found as one wanders along the Amagertorv square, with its fine inlaid Italian granite stonework and its numerous old buildings – the oldest of which dates back to 1600. A highlight for shoppers seeking porcelain and modern Danish design, the square also holds the city's first ever public toilets – still free and very clean (look for the stairs to the underground).

Built in 1888, the Stork Fountain was a present to Crown Prince Frederik and Crown Princess Louise in connection with their upcoming silver wedding anniversary. A popular meeting spot for locals and tourists, it is decorated with various aquatic plants and in the basin, frogs spewing water. On a shelf on the pedestal stand three storks ready to take flight.

Since 1950, it has been a tradition that midwives dance around the fountain as part of their graduation ritual. The key here, of course, would be to time your trip around the summer solstice (or Midsummer), when graduates come by the truckload (not an expression – via actual trucks!) to dance around, and wade/swim in the fountain. Grab a table with a good view of the fountain in the evening, and wait for the show to start!

***HANS CHRISTIAN ANDERSEN'S COPENHAGEN***
The most familiar tale about the stork's role in bringing babies, written by H. C. Andersen, was first published in 1838. They storks know "the pond in which all the little children lie, waiting till the storks come to take them to their parents. The prettiest little babies lie there dreaming more sweetly than they will ever dream in the time to come. All parents are glad to have a little child, and children are so pleased with a little brother or sister." This is probably why the Stork Fountain among the most famous fountains in this part of the world.
Image by Karen Mardahl on Wikimedia under Creative Commons License.