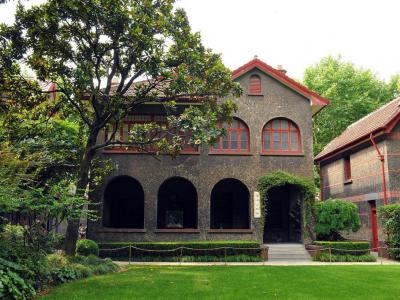 The former residence of Dr. Sun Yat Set is a European style building located in Xinagshan Road, Shanghai. It was here that the author of modern China and his wife Soon Ching Ling lived between 1918 and 1925.

The former residence of Dr. Sun Yat Sen in Shanghai is often called the birthplace of modern China. It is in this house that the great revolutionary thinker wrote many of his well known books including the Doctrines of Sun Wen and the Plans for China’s Development. The house continued to be the residence of Madame Sun Yat Sen after his death in 1925. In 1961, she gave the house to the government to be preserved as a memorial to Dr. Sen. It was opened for public viewing in 1988.

Visitors to the house are greeting by a bronze statue of Dr. Sun Yat Sen. The interiors are preserved and the original furniture and furnishings used by the couple are on display. All the books and personal effects like the spectacles used by Dr. Sen can also be viewed and the memorial has many pictures and photographs showing his life and times. On his birth and death anniversaries, flower tributes are offered by the Municipal Government, his family members, local people and visitors in honor of his valuable contribution to Chinese history.