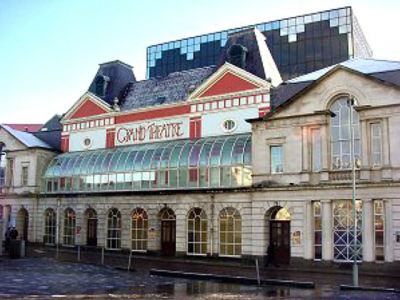 The theatre opened in 1897. It was designed for proprietors Morell and Mouillot by architect William Hope, built by D. Jenkins and opened by Madame Adelina Patti - a locally resident operatic diva. In 1968, the Swansea Grand was threatened with closure but, following a campaign led by its manager and artistic director John Chilvers, the theatre was saved. The theatre was then refurbished and updated between 1983 and 1987 at a cost of £6.5m. A further £1m was spent on an Arts Wing which opened in 1999.

The Grand Theatre has a 1,000-seat auditorium and variety of smaller studios and rooms. The Arts Wing is the most recent development at the theatre, a space to host exhibitions, conferences and smaller-scale music and drama performances including lunchtime theatre on the last Saturday of each month and a regular comedy club featuring acts on the comedy circuit.
Image by Fanrailuk on Wikimedia under Creative Commons License.
Sight description based on wikipedia

Want to visit this sight? Check out these Self-Guided Walking Tours in Swansea. Alternatively, you can download the mobile app "GPSmyCity: Walks in 1K+ Cities" from iTunes App Store or Google Play. The app turns your mobile device to a personal tour guide and it works offline, so no data plan is needed when traveling abroad.