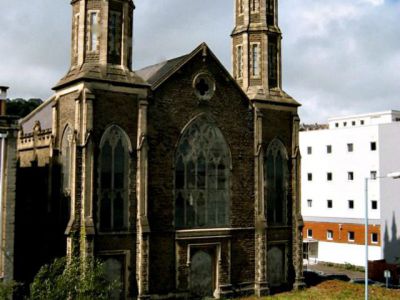 Swansea Mosque is located in two former terraced commercial buildings on St. Helen's Road, serving the Muslim community in Swansea since the 1980s.

The New Mosque building was originally founded in 1862 as St. Andrew's Church. Built in 1864 by Scottish immigrants working in the drapery trade, St. Andrew's was at that time Swansea's only Presbyterian Church.

Designed by Mr John Dickson, the iconic façade with its decorative twin towers gives the building a towering perspective and beautifully set off the skyline surrounding St. Helen's Road. St. Andrew's later became a United Reformed Church before falling into dereliction. After fire damage in 1964, the rear hall was redesigned and rebuilt.

In 2004 following the merger of the charity with the Mosque, the current restoration and renovation plans commenced. When opened as Swansea's new Mosque this beautiful landmark building will once again be utilised for the worship of God, and its community centre welcome to all local residents.