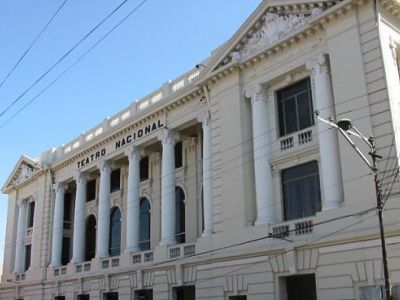 Teatro Nacional de El Salvador, or National Theatre of El Salvador, is the oldest theatre in Central America. It began construction on November 3, 1911, by the French architect Daniel Beylard; and inaugurated March 1, 1917. The theatre is of French Renaissance style with modern touches. It was decorated by the Italian architect Lucio Capellaro, and its Great Hall is one of the most beautiful and elegant in Central America. After 59 years of constant activity, in 1976, a process of remodeling was begun. Funds were provided by the Salvadoran government.

Multiple architectural styles were enriched in the fusion of the construction of the National Theatre including: Versailles Style, Rococo, Romanticism, and Art Nouveau, with regional touches. Some of the furniture was elaborated in the shop of the theatre, the rest of the furniture, rugs, carpets, armchairs, and lecterns, were imported from the United States.
Image by Pedro Nonualco on Wikimedia under Creative Commons License.
Sight description based on wikipedia