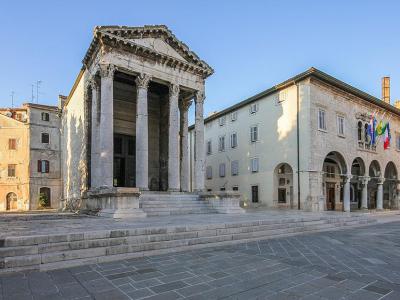 Temple of Augustus, Pula (must see)

Sitting next to the Communal Palace in the Forum Square of Pula, is the Temple of Augustus. "To Rome and Augustus Caesar, son of the deity, father of the fatherland", the sign once hammered into the temple walls said. Augustus had been a god. Only the nail holes of the bronze sign remain.

Augustus had to wait until after his death in AD 15 to be diefied. The temple was actually built in 2 AD. The building is lavishly decorated. It is built on a podium with a tetrastyle prostyle porch having Corinthian columns with friezes. The overall dimensions are 26 feet by 57 feet in area and 46 feet in height.

The temple originally was one of three. It was located on the left side of the main central temple. The Temple of Diana stood on the opposite side. The main temple has not survived intact, while the back wall of the Temple of Diana was incorporated into the Communal Palace, built in 1296.

The temple of Augustus was closed after the persecution of pagans began in the 4th century. When Pula came under Byzantine rule in the 8th century, the temple was converted into a church dedicated to Mary. In the 17th century, under Venetian rule, the temple was incorporated into a complex of neighboring buildings on the square.

The interior of the temple is a small museum of tombstones and Roman sculptures. These were discovered during excavations of the colony Pietas Lulia, by Napoleonic General Auguste de Marmont, governor of the Illyrian Provinces. Traces of frescoes can be seen on the interior walls.

The Temple today is a lapidarium. For a good look at Pula's Roman beginnings, this is a main destination.
Image Courtesy of Wikimedia and Martin Kraft.