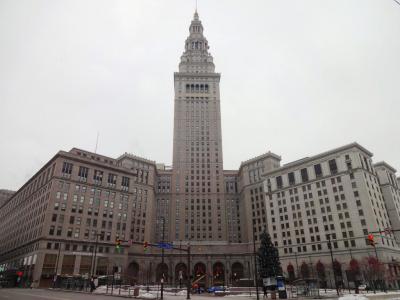 The Terminal Tower is one of the most noteworthy buildings in Cleveland, having been completed in 1930. This building has 52 floors and was the tallest building outside New York City until 1953. During its history, this building has served as an office building and a residence. The building's 42nd floor has an observation deck, allowing views up to 30 miles away.

This tower's exterior has 508 LED lights that can feature lighting themes for holidays and to show support for causes. Red, white and blue is commonly seen on federal holidays, while red and green are in use during the holiday season. Color themes for causes have included red for heart disease awareness, pink for breast cancer awareness, and rainbow colors in honor of GLBT causes.

There is shopping available in the lower floors of the tower, and visitors will also find some restaurants representing several cuisine types. A movie theater allows visitors to catch a movie while in the area. There is also a walkway to Progressive Field and Rocket Mortgage Fieldhouse from the building.
Image Courtesy of Flickr and Matt Boulton.

Want to visit this sight? Check out these Self-Guided Walking Tours in Cleveland. Alternatively, you can download the mobile app "GPSmyCity: Walks in 1K+ Cities" from iTunes App Store or Google Play. The app turns your mobile device to a personal tour guide and it works offline, so no data plan is needed when traveling abroad.

Cleveland has some of the best museums in the mid-west US. The Museum of Art, Dunham Tavern Museum and the Museum of Natural History are just a few of these extraordinary places. Discover Cleveland’s great museums on this self-guided tour.

The City of Cleveland dates back to 1796 when the Connecticut Land Company laid out the area into a township. They named the new town after their leader, General Moses Cleaveland.

With its waterfront location, the city became a major center for trade and commerce over the next few decades. When the railroad arrived in the area in the mid-19th century, the town began to evolve into a central...  view more