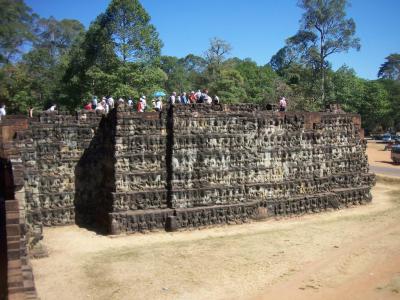 Terrace of the Leper King, Siem Reap (must see)

The Terrace of the Leper King (or Leper King Terrace) is located in the northwest corner of the Royal Square of Angkor Thom, Cambodia. It was built in the Bayon style under Jayavarman VII, though its modern name derives from a 15th century sculpture discovered at the site. The statue depicts the Hindu god Yama, the god of Death. He was called the Leper King because discoloration and moss growing on the original statue was reminiscent of a person with leprosy, and also because it fit in with a Cambodian legend of an Angkorian king who had leprosy. The name that the Cambodians know him by, however, is Dharmaraja, as this is what was etched at the bottom of the original statue.
Image by Serinde on Wikimedia under Creative Commons License.
Sight description based on wikipedia