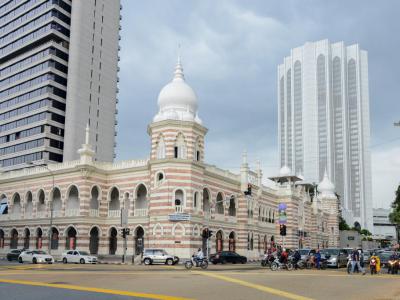 Malaysia is well known for its creative textile art and exquisite fabrics. Famous amongst the fabrics is the Batik style, an age old technique of staining the cloth with wax-resistant dye to produce beautiful patterns. Although the Batik may have established itself outside the boundaries of Malaysia, one would be surprised to discover the various types of traditional textiles, fabric and designs that the country has to display, some of which are much older than the Batik itself.

The best place to educate oneself about the array of local textiles and the art of Batik is the National Textile Museum. It showcases some of world’s rarest and most exquisite textiles. Located at the Jalan Sultan Hishamuddin, the Museum is housed in over a century old heritage building that was previously occupied by various institutes and civil departments.

The Museum is segmented in four well organized galleries, each depicting an era of the Malay textile history and the influence of the varied cultures that added more variety to the fabric of time. Each gallery has a unique story to tell that is sure to keep you captivated till the end. The galleries cover every aspect of textile history; like prehistoric fabric, tools, materials and techniques to present day Batik fabric and its evolution. The Museum also sheds light upon the various cultures along with their respective textiles and fabrics, and explores their influence on the local art. The Museum also showcases some of the most breathtaking jewelry from various parts of the world.

Designed by Arthur Benison Hubback in an Indo-Saracenic Revival architecture, the building was originally completed in 1905 to house the headquarters for the Federated Malay States Railways (FMSR, now KTM). After the FMSR moved to the Railway Administration Building in 1917, the building has subsequently housed various government and commercial occupants, before being converted for use as the National Textile Museum and opened to the public on 9 January 2010.

The building was gazetted as a historical building in 1983.
Image Courtesy of Flickr and Jorge Láscar.