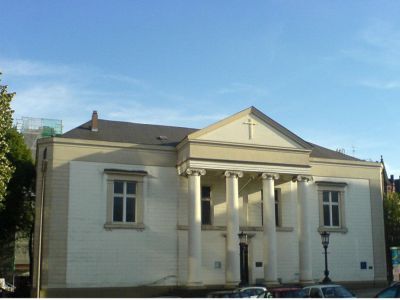 The Anglican Church of St Thomas Becket is situated on Zeughausmarkt, midway between the St. Pauli district and the modern city centre. Housed in an elegant, listed neoclassical building with a white façade and imposing columned entrance, it has represented the Church of England in Hamburg since the 17th century. The parish has existed in some form since 1612, and was one of the first non-Lutheran churches to thrive within the city of Hamburg. The church was set up to allow British seamen and maritime traders access to a place of worship whilst they were in port. Following decades of steady growth, the church moved into its current home in 1838.

Today, the church of St Thomas Becket hosts a diverse congregation, with British ex-pats, Germans and worshippers from other countries all regularly attending the Sunday morning Eucharist service, which starts at 10.30am. The church has flourished within Hamburg’s cosmopolitan confines, despite the turbulent relations between Germany and Britain in the 20th century. A progressive place of worship, it welcomes Christians of all nationalities and denominations. The church is open throughout the week, and is fully wheelchair accessible. It hosts a regular choir, as well as a Sunday school and coffee morning alongside its Eucharist service.
Image by PodracerHH on Wikimedia under Creative Commons License.