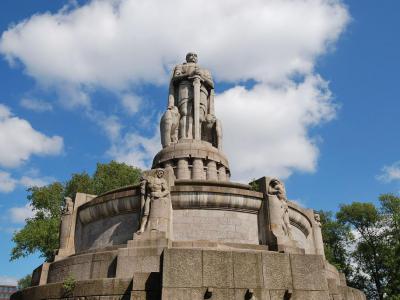 The Bismarck Memorial, Hamburg (must see)

The Bismarck-Denkmal, or Bismarck Monument, is located in Hamburg’s historic St. Pauli quarter. It is the largest and best known of over 250 worldwide memorials to Otto von Bismarck. Von Bismarck was a 19th century German statesman, credited with unifying many independent states into a unified Germany in the 1870s. Germany is a federal nation, composed of several semi-autonomous states, and frequently divided throughout the 20th century. Von Bismarck is credited as the first leader to truly create a German nation.

The Bismarck Monument stands on the Elbhöhe, a public park close to the Landungsbrücken in northern Hamburg. It was designed by Johann Emil Schaudt, and first unveiled in June 1906, eight years after the death of von Bismarck. Like most memorials of the esteemed leader, the Bismarck Monument takes the form of a tower, topped with a statue. These towers, built between the death of von Bismarck and the ascension to power of the Nazi party, can be found across Europe, in parts of Austria and Poland that once belonged to Germany, as well as in distant outposts of the German Empire, such as Cameroon, Chile and Papua New Guinea. The Hamburg tower is taller than any other, rising to 115 feet in height.
Image by Bejo on Wikimedia under Creative Commons License.