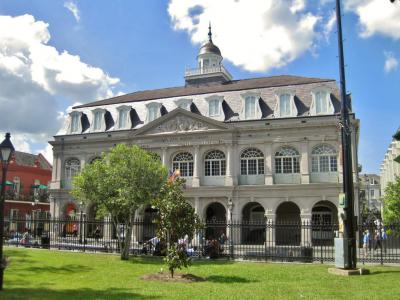 Just as with The Presbytère, the sister building on the other side of St. Louis Cathedral, the historical Cabildo has a storied history of fires, rebuilding, and roles as the seat of the former Spanish territorial government. Walking through the building one can sense the history of former times. In fact, ceremonies for the Louisiana Purchase transfer – a transaction that nearly doubled the nominal size of the U.S. – occurred here in 1803.

Against such background, The Cabildo is quite well qualified to house the premier collection of New Orleans and Louisiana historical artifacts – starting with the earliest explorers and covering slavery, post-Civil War reconstruction, and statehood. The detailed history is told from a multicultural perspective and touches on interesting topics like immigration and assimilation, antebellum music, mourning and burial customs, and the role of the Southern woman.

Portraits of historical figures and incidents are hung throughout the museum, though probably the most memorable section is the one explaining the city's connection with Napoleon, evident in the naming of various streets, as well as in the preservation of the French Empreror's death mask, donated to the museum by his doctor. The item and its story of it almost ended up in the dumpster are fascinating.

This three-story building is packed with the 300-year history of Louisiana – from its indigenous beginnings to the French/Spanish influence, Battle of New Orleans, significant people in the state's past, and more. A great place to go if you like history and facts. As an extra, the upstairs offers great views of Jackson Square.

Tip:
Get a 20% off combo ticket with The Presbytère on the Cathedral's other side (or with any other Louisiana State Museum).