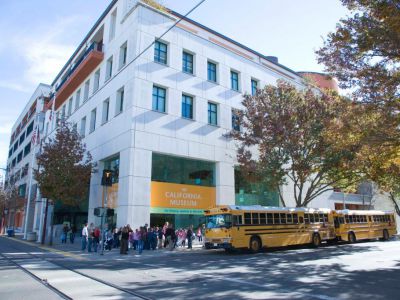 The California Museum for History, Women and the Arts, Sacramento

The California Museum, formerly The California Museum for History, Women and the Arts is housed in the State Archives Building in Sacramento, one block from the State Capitol. The building has more than 20,000 square feet of exhibit space, and facilities for lectures, performances, receptions and events.

Originally called the Golden State Museum, The California Museum opened in June 1998 as a unique public/private partnership. In May 2004, former First Lady Maria Shriver, working with the Secretary of State and California State Parks, presented an exhibit titled “California’s Remarkable Women.” This trailblazing exhibit honors the legacy and celebrates the accomplishments of California’s remarkable women of yesterday and today. The exhibit’s success set in motion the idea for The California Museum for History, Women and the Arts—a Museum that tells the story of California and for the first time the stories of California’s women.

Towering six stories over the Museum’s courtyard, the public art piece “RIGHTS” inspires thought and comment. Sculpted into the massive wall are words taken from California’s Constitution and chosen for their enduring meaning. Depending on the angle of the light, different words leap forward. In the early morning or late afternoon, the giant word “RIGHTS,” the underlying theme of the piece, stands out, while at midday other “rights,” indicated by words such as “redress” and “assemble,” are more apparent. The artists’ grouping of the words adds another layer of meaning, punctuated by colors drawn from California’s own palette of forest, ocean, and desert hues.