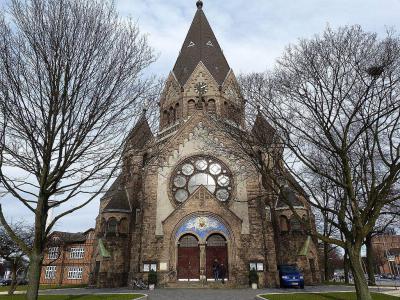 The Church of Mercy, Hamburg

Gnadenkirche, or the Church of Mercy, is located on a busy section of Holstenglacis, a road which forms the northern boundary of the Planten un Blomen public park. Built in 1907, it is a neo-Roman style church. It is notable for its distinctive central steeple with a diamond shaped roof. Inside, the small church hall is built around the altar and pulpit, giving the space a theatrical feel. This style is typical of Reformation ecclesiastical architecture. This style dominated protestant religious buildings before 1900, but was less common in the 20th century.

The Church of Mercy is one of several Protestant churches in the city of Hamburg. Traditionally a Catholic city, it fully embraced the reformation, and most city centre churches that are still open are Protestant or Lutheran places of worship. This church, located on a junction where traffic noise is sadly always audible, is close to the Reeperbahn and Landungsbrücken in the city’s bohemian St. Pauli district, north west of the city centre. It is believed to have earned its name due to an image of Mary found within the church which people will travel to the church to view. These churches, generally small city chapels, are known as churches of mercy, or grace chapels.
Image Courtesy of Wikimedia and Northside.