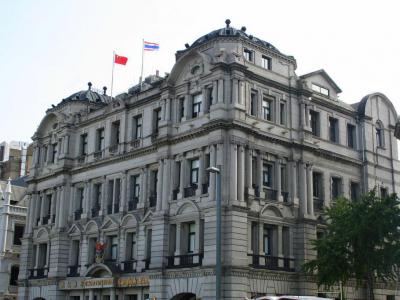 This Beaux Arts Style building located at No: 7, the Bund, Shanghai first housed the offices of the Danish Great Northern Telegraph Company. The first telephone switch in Shanghai was installed here.

Construction of the Great Northern Telegraph Company Building began in the early 1900s. In 1905, a fire broke out and delayed the work. The building was finally opened in 1908. The Great Northern Telegraph Company was the first to provide telephone and telegraph services in Shanghai. They occupied the first floor and the front of the building had luxurious suites for the residence of its manager, engineer and accountant. Later, the British owned Eastern Extension Telegraph Company and the American owned Commercial Cable Telegraph Company also had their offices in the building. The renaissance style Beaux Arts structure was designed by the firm of architects, Atkinson and Dallas. Some of the unique early telegraph equipment is still available including a pneumatic tube system used in handling telegrams.

The Chinese Commercial Bank moved into the building in 1922. From 1995, the Bangkok Bank has occupied a part of the building. The other part has become the Royal Consulate of Thailand and the residence of the Thai Consul General.
Image by Ferox Seneca on Wikimedia under Creative Commons License.