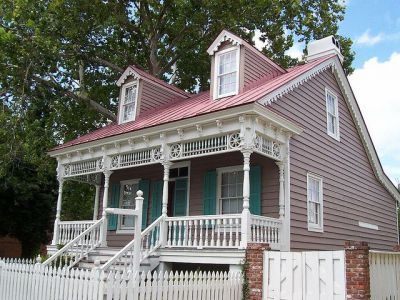 The building is furnished in a style typical of a black residence in the 1890s. The cottage was originally built in another area in 1896 by W.W. Aimar, and features gingerbread-style adornment on the porch in a distinctive wheel and spindle pattern. It was threatened by demolition in 1970, but the City of Savannah and Historic Savannah Foundation managed to save the historic building, move it to its current location, and re-construct it.

The museum's exhibits demonstrate the history of Savannah and the Sea Islands, emphasizing the many ways that African-Americans have contributed to the area's history. One of the exhibits is particularly noteworthy- an original bill of sale for slaves, handwritten in Arabic by slaves on a plantation. Outside, the Cottage features the fountain “Free to Fly,” by famous sculptor Ivan Bailey, and a gas light dedicated to key civic leader Sadie Steele.
Image by TW Collins on Flickr under Creative Commons License.