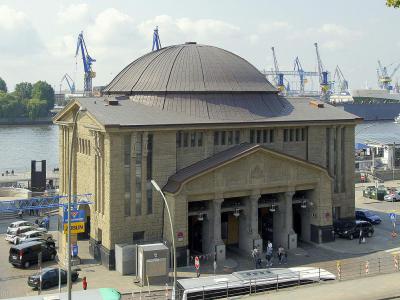 The Old Elbe Tunnel is an underground transportation route for vehicles, bicycles and pedestrians. It runs from the Landungsbrucken to the docklands area of Hamburg, underneath the river Elbe. Built from 1907-1911, the Alter Elbtunnel, as it’s known in Germany, was a remarkable feat of engineering for the time. Two huge lifts at each entrance carried pedestrians, carriages and motor vehicles from street level down into the 500m long tunnels. When the tunnel opened, it provided a vital link for workers from the main city to the docklands and harbours of Hamburg’s southern districts.

The Old Elbe Tunnel was built with the same high pressure technique used on New York’s Brooklyn Bridge. Workers excavated the tunnel path under pressurised conditions, to prevent ground water flooding the chamber. An effective but highly dangerous method, it lead to several deaths and injuries amongst the work force. The pedestrian tunnel is 20 feet in diameter, and is lined with terracotta ornaments, depicting items found in the Elbe from crabs and sturgeons to rats and old boots. Eventually superceded by the longer, directly accessible New Elbe Tunnel, which opened in 1975, the original tunnel still carries over a million cars, bicycles and pedestrians under the river each year.
Image by Krolle on Wikimedia under Creative Commons License.