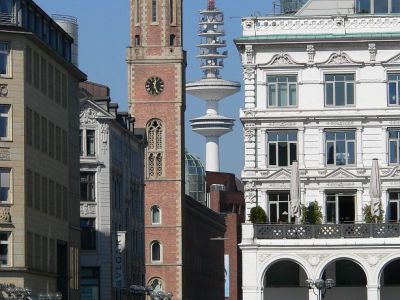 The Old Post Office is situated immediately next to the Hamburger Rathaus, in the Neustadt area of the city which houses many of Hamburg’s civic buildings. It was designed by Alexis de Chateauneuf, a German architect tasked with creating and restoring a number of buildings followed the Great Fire of Hamburg in 1842. The ground floor of the former Post Office building bears a series of arches similar to the nearby Alsterarkaden, also designed by de Chateauneuf. Opened in 1847, the building was later converted into a shopping arcade, which it remains to this day.

The Old Post Office building, rather than a reconstruction of a damaged or destroyed landmark, was created by the architect to solve a problem particular to Hamburg. The city covers a large area, divided by rivers and lakes, and faced many challenges to set up basic networks, including transportation, sanitation and a postal service. In 19th century Hamburg, four different regional companies delivered post around the city – Hamburg’s city post office, Thurn & Taxi, the royal Hannover post office and the Swedish postal service. This building, with four separate entrances and extensive mail transfer facilities, began the process of centralizing postal services in this growing city state.
Image Courtesy of Wikimedia and Wmeinhart.