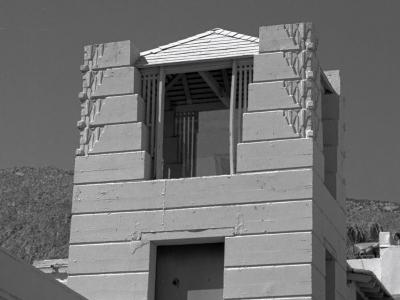 In the 1920s, when Palm Springs was becoming the vacation boom town for the Southern California elite, Pearl McCallum McManus commissioned a new hotel to be built to house all of these visitors. He commissioned locally-renown architect Lloyd Wright, son of Frank Lloyd Wright, to design it. The result was the small but luxurious 24-room Oasis Hotel.

Wright was known for his modernist buildings, and the hotel was a decade or more before its time. It became the showpiece of the town–it even had the first swimming pool. Wright used stacking geometric concrete blocks to build the individual units, which were clustered around open courtyards. Ornamental wooden screens protected the rooms, which had large windows, from the blazing desert heat. The glass-walled dining room was built around existing cottonwood trees, with their limbs seeming to grow right into the building.

The Oasis Hotel opened in 1925 and was a smash hit. Stars like John Wayne, Lorette Young, and Clark Gable made the Oasis their getaway of choice and reinvented the little village around it. In the 1950s, the hotel was sold to Western Hotels, and much of the original property was dismantled or destroyed. Today, only the 40-foot decorative tower and a few construction blocks remain, tucked between businesses on Palm Canyon Drive. It is designated by the city as a Class I Historic site.
Image by Ron Gilbert on Flickr under Creative Commons License.