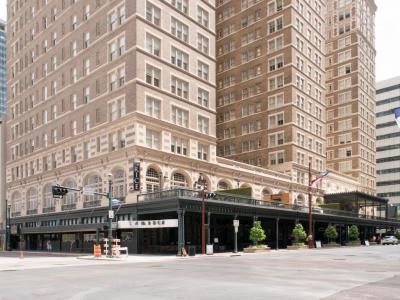 The present-day Rice building has been constructed in 1913, providing the basic concept for most hotels in Texas at that time. According to legislation, each hotel room had to have a window, and the building was designed in a U-shape so as to meet that requirement; also, every room had a bathroom, which was an unusual concept back in those days. What is more, the original architects went to Georgia and bought an entire terracotta company, which explains why the exterior is studded with gargoyles, dragons, cherubs, and everything else that could fit.

Through the years, the Rice became one of the great hotels of the South, as well as Houston's social center, frequented by the rich and famous. In the first half of the 20th century, before air-conditioning, the roof garden restaurant was the most popular place in town for dining, dancing and enjoying the cool breezes. Among the hotel's guests were also several U.S. Presidents, including John F. Kennedy, who gave one of his final speeches here just one day before his fateful trip to Dallas.

If time allows, you can visit the two-story lobby, enjoy the beautiful stained glass, and get a peek into the Crystal Ballroom filled with awe-inspiring murals and adorned with crystal chandeliers.
Image by Patrick Feller on Flickr under Creative Commons License.