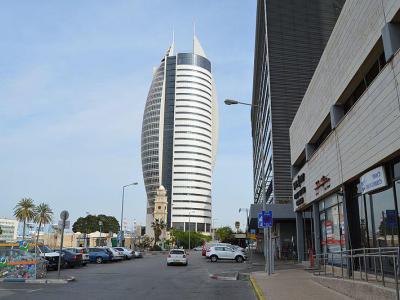 The District Government Center in Haifa was planned to combine new and old elements. In contrast with the modern Sail Tower, the promenade leading up to it was designed in an older Middle Eastern style, including mosaic on the floors depicting the history of Haifa. One of the maps depicted dates back to 1773.
Image by Eurovaran on Wikimedia under Creative Commons License.
Sight description based on wikipedia

This sight is featured in a self-guided walking tour of Haifa, Israel within the mobile app "GPSmyCity: Walks in 1K+ Cities" which can be downloaded from iTunes App Store or Google Play. Please download the app to your mobile phone or tablet for travel directions for visiting this sight. The app turns your mobile device to a personal tour guide and it works offline, so no data plan is needed when traveling abroad.