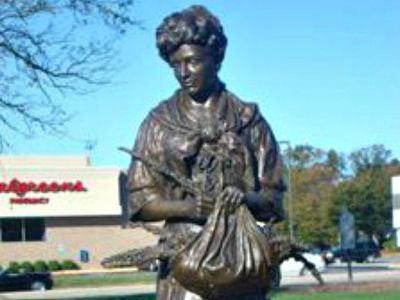 The statue of Grace Sherwood, also known as the Witch of Pungo, is probably the most famous monument in Virginia Beach. In 1698, Grace Sherwood was said to be guilty of bewitching somebody's crops. She was the last person known to have been convicted of witchcraft in Virginia. She was imprisoned and tortured. In fact, she was not a witch but a good woman who loved animals. She was also considered a special healer in her time, hence the statue’s location near a hospital.

Want to visit this sight? Check out these Self-Guided Walking Tours in Virginia Beach. Alternatively, you can download the mobile app "GPSmyCity: Walks in 1K+ Cities" from iTunes App Store or Google Play. The app turns your mobile device to a personal tour guide and it works offline, so no data plan is needed when traveling abroad.

Virginia Beach has plenty to enjoy for art lovers visiting the city. The area nearest the coastline is of particular interest, as a number of heritage landmarks are located in this old part of the city. There are also many contemporary art galleries, museums and monuments around the city that highlight the cultural aspects of Virginia Beach. Take our Cultural Tour to see the best art spots in the...  view more