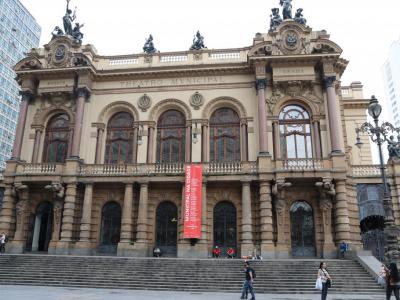 The Municipal Theatre is an important theater and cultural institution in Sao Paulo. Built in 1911 by Brazilian architect Ramos de Azevedo and Italian architects Claudio Rossi and Domiziano Rossi, the Neoclassical and Baroque design is based on the Paris Opera building.

The building was built to fill the need for a theater that would fulfill the desires of its residents. The previous theater, Teatro São Bento, had suffered fire damage and was no longer a viable option for artistic performances. Therefore, the people demanded and received a theater worthy of performances equivalent to those in Europe. Famous artists such as Anna Pavlova, Duke Ellington, Isadora Duncan, Vivien Leigh, Mikhail Baryshnikov, Enrico Caruso, Maria Callas, and Rudolph Nureyev have graced the stage.

Municipal Theatre is most famous for being the location of the Week of Modern Art, an event that put Sao Paulo on the artistic map. Sao Paulo was an important cultural city, but relatively unimportant on an artistic level. The Week of Modern Art event made Sao Paulo a leader and major influencer in the modern art movement. The building now houses the São Paulo Municipal Symphonic Orchestra, the Coral Lírico (Lyric Choir) and the City Ballet of São Paulo.

Why You Should Visit:
A true gem in the heart of the city – great spot for taking beautiful pictures.
Besides its sumptuousness, outside and especially inside, it gives insight into quite a few of Brazil's moments 100 years ago.
The ambiance is sophisticated, there is a great bar with drinks, soups and treats, and the selection of plays, concerts and operas is always great.

Tip:
Make sure you're there at 11 AM on weekdays for the free, guided, one-hour tour.
If you're leaving a performance late at night use caution as you would in any large urban setting.