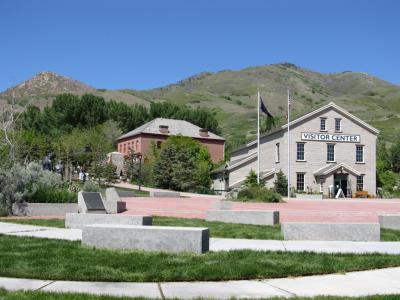 This Is the Place Heritage Park, Salt Lake City (must see)

This Is the Place Heritage Park is located on the east side of Salt Lake City at the foot of the Wasatch Range and near the mouth of Emigration Canyon. Here on July 24, 1847, Brigham Young first saw the Salt Lake Valley that would soon become the Mormon pioneers' new home. In 1917 B. H. Roberts and a Boy Scout troop built a wooden marker identifying the spot where Brigham Young's party first entered the valley. In 1921 this was replaced by a white stone obelisk that still stands east of the 1917 monument. Development of the monument began in 1937 when sculptor Mahonri M. Young, a grandson of Brigham Young, was commissioned by the State of Utah to design and create a new, larger monument. In 1957, a group of private citizens bought much of the land now contained in the park and donated it to the State of Utah to preserve it from commercial development.
Image by Cory Maylett on Wikimedia under Creative Commons License.
Sight description based on wikipedia