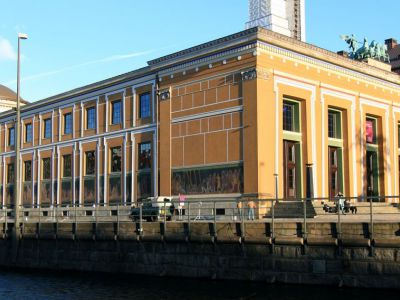 The Thorvaldsen Museum is a single-artist museum in Copenhagen, dedicated to the art of Danish neoclassicistic sculptor Bertel Thorvaldsen (1770–1844), who lived and worked in Rome for most of his life. The museum is located on the small island of Slotsholmen in central Copenhagen next to Christiansborg Palace. Designed by Michael Gottlieb Bindesbøll, the building was constructed from 1838–48.

The building is strongly inspired by antique Greek architecture and built around an inner courtyard where the artist is buried. The courtyard is notable for being painted in Egyptian motifs: tall date palms; lions and crocodile prowl among exotic birds and plants. The Egyptian influence on the exterior is more chaste. Here, enormous doors in severe trapezoidal style define the architect's intentions to pay homage at once to Attic Greek, Pompeian and Egyptian style. It is noteworthy for its unique use of colors both inside and outside. Every room in the museum has a unique ceiling decoration in the grotesque style. The outside is adorned with a frieze depicting Thorvaldsen's homecoming from Rome in 1838, made by Jørgen Sonne.

The museum displays a comprehensive collection of the artist's works in marble as well as plaster, including the original plaster models used in the making of cast bronze and marble statues and reliefs, which are now on display in museums, churches, and at other locations around the world. The museum also features paintings, Greek, Roman and Egyptian antiques, drawings, and prints that Thorvaldsen collected during his lifetime, as well as a wide array of personal belongings that he used in his work and everyday life.

Why You Should Visit:
To be taken back to the classical XIX Century museums.
All the works of Thorvaldsen are masterpieces that tell you stories of gods, adventures and other Greek and Roman myths.

Tip:
Come on a Wednesday as it is free to enter on that day each week.
Don't forget to look up and down as you walk through the galleries.
Definitely get the audio guide which is organized well, and you have options to delve deeper as needed.