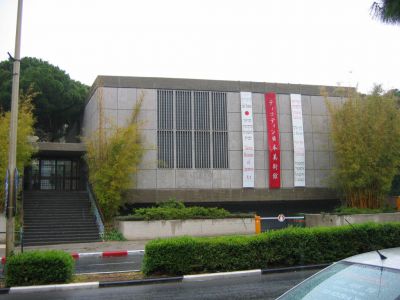 The Tikotin Museum of Japanese Art is devoted to displaying and conserving Japanese artworks and is the only one of its kind in the Middle East. It was founded in 1959, with the assistance and on the initiative of Felix Tikotin (1893-1986) of the Netherlands, and the late Abba Hushi, who was then the Mayor of Haifa. The museum's collection comprises some 7,000 items including paintings, prints, drawings, screens, textiles, ancient illustrated books, ceramics, miniature carvings (netsuke), metal and lacquer work, antique swords and handicrafts, mainly from the 14th to 19th centuries. It also has some modern Japanese artworks. In 1995, a new wing designed by the late Japanese architect Junzō Yoshimura of Tokyo and Israeli architect Professor Al Mansfeld was added to the existing gallery.

Why You Should Visit:
Japan's art in a nutshell! Lots of constant exhibits of 'classical' Japanese art plus regular temporary exhibitions.
Signage is good (in both Hebrew & English); there is a small cafeteria and a pretty sweet gift shop.

Tip:
Might look just a bit overpriced, but check for discounts and consider buying a combined ticket (6 museums in a week for ~15 euro – see the Haifa Museums site).

This sight is featured in a self-guided walking tour of Haifa, Israel within the mobile app "GPSmyCity: Walks in 1K+ Cities" which can be downloaded from iTunes App Store or Google Play. Please download the app to your mobile phone or tablet for travel directions for visiting this sight. The app turns your mobile device to a personal tour guide and it works offline, so no data plan is needed when traveling abroad.