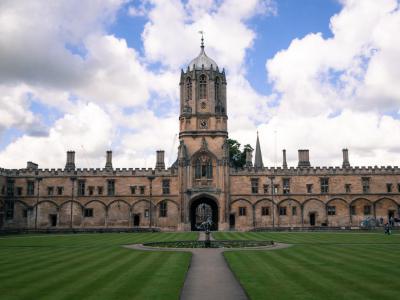 On your first evening in Oxford you may will be surprised to hear a bell ringing out 101 times at five past nine. Something is strange here and the next morning you will seek out the source of this oddity, which is to be found in Tom Tower over Tom Gate, on St Aldates, the main entrance of Christ Church. It leads into The Great Quadrangle, more popularly known as Tom Quad - one of the quadrangles of Christ Church and the largest college quad in Oxford.

The bell tower was designed by Cardinal Wolsey in 1532, but when the Cardinal fell from power, the building remained unfinished. A 150 years later, Sir Christopher Wren was commissioned to finish the tower and his designs kept to the original late Gothic style, even though it had been out of fashion for a long time.

The work was carried out by master stonemason, Christopher Kempster. The tower is square with an octagonal lantern topped by an ogee dome, which has been copied many times over the centuries.

The bell inside the tower is called Great Tom. It weighs over 7 tons and is 1.52 metres high and 2.13 metres across the base. It is unclear exactly when the bell was first cast, but early records name it Mary and until 1545 it hung in Osrey Abbey, upon which it was moved to St Fridewide’s Church and renamed Tom.

It had been recast three times before it was moved to Tom Tower in 1682. The final recasting before its installation was carried out by Christopher Hodson.

As to the hour it chimes its 101 peal: Oxford time was once calculated five minutes after Greenwich Time. This isn’t unusual, as most towns had their own time until 1848, when Railway Time was officially adopted, based on Greenwich Time. The 101 peals were once a signal for the college’s original 101 students to return before the gates closed. It remains to this day a part of college tradition.
Image by Paul Hayday on Flickr under Creative Commons License.