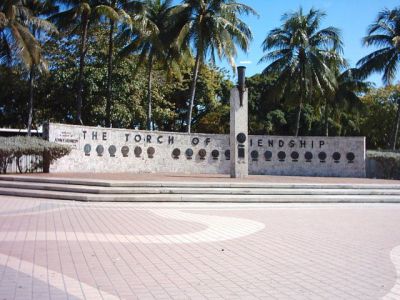 The Torch of Friendship is a monument located at the northwest corner of Bayfront Park in downtown Miami. It was opened in 1960 to welcome the friends and neighbors of Florida from the Caribbean and South America.

The Torch was installed by the City of Miami to signify the city’s status as the gateway to the Caribbean. The inscription on the monument reads, “The Torch of Friendship dedicated by the City of Miami to the everlasting friendship of our neighboring countries.” It has a gas-fired torch installed at the top of an 18-foot pedestal with an everlasting flame that was meant to be a welcoming beacon for visitors and immigrants.

The Torch of Friendship was rededicated four years after its installation to the memory of the assassinated President John F. Kennedy. The burning candle was regarded as an extension of the candle that burns at Kennedy's gravesite in Arlington. Today, the candle has stopped burning. Some believe that it was a deliberate act, while others reckon that the gas pipe supplying the fuel must have been damaged. Recently, the Torch of Friendship Monument has become a venue for gatherings, commemorations and peaceful protests against national and international injustices.
Image Courtesy of Wikimedia and Frank Ballesteros.