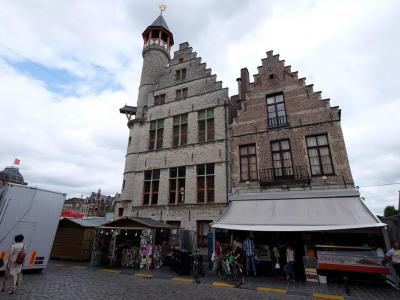 The former House of the Corporation of Tanners, nicknamed Het Toreken (The Tower), is a listed Gothic-style building. Also known as Huidevettershuis (Skinners' House) or Meerminne (Mermaid), this corner house on Vrijdagmarkt (Friday Market Square) in Ghent is the oldest one in the area.

Back in the 14th century, “gray” (fur) and “lamb” (sheepskin) workers traded their merchandise here in a wooden building. They bought it in 1422 and in 1450 upgraded it to a house of stone (made in Balegem stone). The landmark watchtower was added in 1483, topped with a weather vane in the shape of a mermaid holding up a mirror, named Melusine. The Maria bell, cast at the Mechelen bell foundry by Joris Waghenens, was hung in the Toreken in 1511.

In 1542 the property was put on sale and came into the possession of private individuals after the Emperor Charles V, native of Ghent, had put an end to the power of the guilds in 1540.

The three-bay façade, overlooking Kammerstraat, culminates in a beautiful stepped gable pierced with small square windows with stone mullion. The façade facing Vrijdagmarkt has four bays with large cross-windows of stone, and is crowned with a slate roof incorporating three levels of small triangular skylights. But the most remarkable element of the building is undoubtedly the cylindrical staircase turret which occupies the corner.

The building has been classified as a historical monument since 1943 and appears in the inventory of the real estate heritage of the Flemish Region. Restored in 1982, the Maria bell regained its original place in the Tower after being kept at the local museum for hundreds of years.

Today the Toreken is owned by the City of Ghent and houses the Poetry Center.
Image Courtesy of Wikimedia and Ben Bender.
Sight description based on Wikipedia.