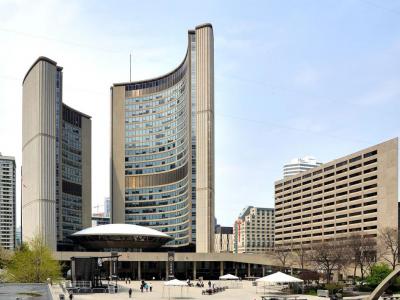 Another architectural landmark of Toronto is the New City Hall. Photographed by many, this symbol of Toronto stands out as a unique structure accentuating the originality and sophistication in the city’s scape.

The New City Hall was designed by Finnish architect Viljo Revell, who was awarded the project following an international competition that drew in over 500 designs from more than 40 nations worldwide. The competition initially underwent grave criticism and ran into controversy over not having a Canadian to design the City Hall. However, the result of that competition gifted Toronto with one of its finest structures which, to this very day, is a popular symbol for the state.

The construction took four years and, by 1964, the two towers were completed. The project was run in collaboration with Heikki Castren, Bengt Lundsten and Seppo Valjus who, according to Revell, were not credited enough for their contribution. The Toronto New City Hall was Revell’s only design outside Finland, and is the one for which he is most known. Unfortunately, the mastermind behind the spectacular structure did not live to see his magnum opus completed, as he died earlier in 1964.
Image by Taxiarchos228 on Wikimedia under Creative Commons License.
Sight description based on wikipedia

This neighborhood, located east of Toronto's downtown, was established in 1840. Once a small community of Irish immigrants and one of the poorest neighborhoods in Toronto, Cabbagetown was declared a historic district in 2004 and claims to be "the largest continuous area of preserved Victorian housing in North America". Check out the highlights of this region, as listed below.