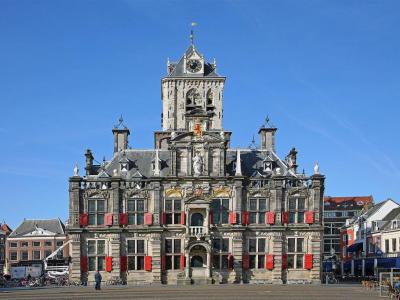 The City Hall in Delft is a Renaissance style building on the Markt across from the Nieuwe Kerk. It is the former seat of the city's government, and still today the place where residents hold their civic wedding ceremonies. Originally designed by the Dutch architect Hendrick de Keyser, it was heavily changed over the centuries and was restored in the 20th century to its Renaissance appearance.

In the town hall from 1618 are some group portraits, and portraits of the counts of Orange and Nassau, including several by Michiel van Mierevelt, one of the earliest Dutch portrait painters, and with his son Pieter, a native of Delft. The oldest part of the complex is the tower covered in "Gobertanger" limestone from Wallonia, a building material used often in important renaissance buildings in the Netherlands up to 1600. The tower, called "De Steen" or "The Stone", was originally built around 1300 and has decorative clockfaces from 1536 and the bells were made by Hendrick van Trier and Francois Hemony. The facade has a "Justitia" statue. Up the stairway and immediately behind the heavy wooden entrance doors is the Vierschaar, with a decorative painting of the Judgment of Solomon by Pieter van Bronckhorst.
Image by Malis on Wikimedia under Creative Commons License.
Sight description based on wikipedia