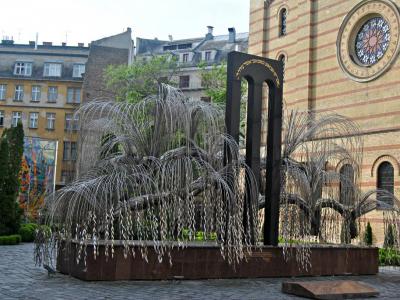 Situated right behind the Great Synagogue of Budapest is the Holocaust memorial park set to commemorate those who risked their lives, during World War II, trying to save the Jews of Hungary from the Nazi extermination, and for which they are declared “Righteous Among the Nations”. Inside the park, there is a monument dedicated to these people. One such man is Raoul Wallenberg, a Swedish diplomat and a key actor in the salvation effort who himself had disappeared mysteriously towards the end of the war. Among the others also honored by this monument is a little-known Spanish consular officer, named Ángel Sanz Briz, who virtually saved some 5,200 Jews by giving them Spanish passports and allowing to use the Spanish embassy as a safe house.

Also, in the middle of the park, there is another memorial called the Tree of Life – a commemorative sculpture paying tribute to some 5,000 Holocaust victims buried in the area. Designed in the form of a willow tree, symbol of mourning in the Hungarian Jewish tradition, it has the names of Holocaust victims inscribed on its leaves.

The park was established in the 1990s after Hungary regained a democratic rule. The memorial was completed in 1996, thanks to the generous donation from Estée Lauder, renowned international manufacturer of beauty and skincare products.

The Tree of Life monument is well visible from a distance, even outside the park. However, if you wish to see it up close, you'll have to pay an admission fee.
Image by Loco Steve on Flickr under Creative Commons License.