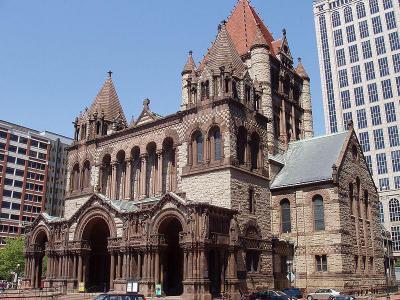 After its former site on Summer Street burned in the Great Boston Fire of 1872, the current church complex was erected under the direction of Rector Phillips Brooks, one of the best-known and most charismatic preachers of his time. The church and parish house were designed by Henry Hobson Richardson and construction took place from 1872 to 1877, when the complex was consecrated. Situated on Copley Square in Back Bay, Trinity Church is the building that established Richardson's reputation. It is the birthplace and archetype of the Richardsonian Romanesque style, characterized by a clay roof, polychromy, rough stone, heavy arches, and a massive tower. The building's plan is a modified Greek Cross with four arms extending outwards from the central tower, which stands 211 ft tall. Trinity Church is the only building from the original 1885 list still included in the American Institute of Architects's current top ten list.

Why You Should Visit:
Fantastically impressive church, especially from the outside where it's just profoundly architecturally outstanding – almost ornate in its appearance.
Positioned in Copley Square so plenty of opportunities to sit a while and enjoy it and other impressive, though different, buildings in the vicinity.

Tip:
Go in and take the self-guided audio tour – you won't be disappointed.