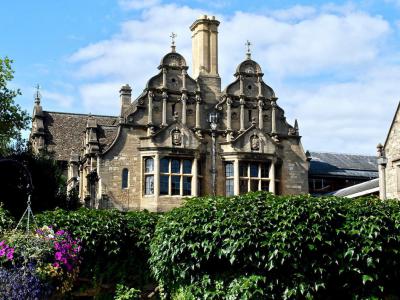 Oxford University started out as academic houses and monastery halls where theology was taught, but none of these survived the Reformation. Trinity College on Broad Street stands on the site of Durham College Monastery which was founded in 1268.

The only surviving part of the monastery is the east range of Durham Quad where the college library is housed. Sir Thomas Pope bought the buildings and the land in 1555 to create a college where, he hoped, future generations would pray for him, as he was childless and had no-one to remember him after he died. His remains are enshrined in the chapel beside the altar.

On top of the college’s West Tower stand four female statues representing Astronomy, Geometry, Medicine and Music. In 1688, a two-storey building, designed by Sir Christopher Wren, was built on the Garden Quad to lodge students. The neoclassical chapel was designed by Henry Aldrich in 1694.

In 1883, the college was expanded and the Front Quad was built by Sir Thomas Jackson. In 1928, the Memorial Library was built in honor of the members who died in World War I. Further expansion took place in the 1960s when several cottages and 17th century houses were bought and the Cumberbatch Building was put up in 1966.

Despite its large physical size, the college is relatively small in terms of student numbers, at approximately 400. It was founded as a men's college and has been coeducational since 1979. Trinity has produced three British prime ministers - Spencer Compton (1742–1743), William Pitt the Elder (1766–1768) and Frederick North (1770–1782), placing it third after Christ Church and Balliol in terms of former students who have held the office.
Image Courtesy of Wikimedia and Dave_S..
Sight description based on Wikipedia.