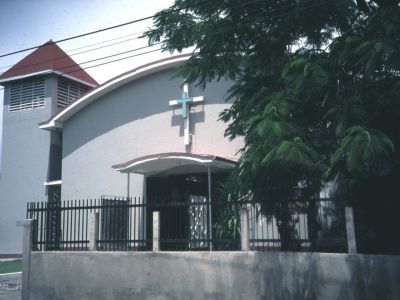 Trinity Moravian church was established in 1954 as part of the bicentenary celebrations of the Moravian Church in Jamaica. The foundation stone was laid on the 9th of December 1954, and the building was dedicated on the 18th of January 1956. Church members came from all the neighbouring areas so that the congregation provided a meeting point for people from different social and economic groups who might not otherwise have met. While the church was being built, services were held in a nearby home so that when the church was opened, communicant membership was already 61, rising to over 400 by 1966, with large numbers of young people and children in Sunday School and youth organisations.
Image by Fred Linyard on Wikimedia under Creative Commons License.
Sight description based on wikipedia

This sight is featured in a self-guided walking tour of Kingston, Jamaica within the mobile app "GPSmyCity: Walks in 1K+ Cities" which can be downloaded from iTunes App Store or Google Play. Please download the app to your mobile phone or tablet for travel directions for visiting this sight. The app turns your mobile device to a personal tour guide and it works offline, so no data plan is needed when traveling abroad.

Kingston Waterfront area coincides with the downtown area and is also the oldest part of the city. There are museums, art galleries, interesting buildings and great monuments. The view of the sea and the port is picturesque. Take this self-guided tour and have a walk along the coastline of Kingston.

Kingston, Jamaica has the New Kingston area that boasts some tourist attractions. You will see beautiful buildings and parks. There are many specific Jamaican monuments there as well. Take this self-guided tour to explore this new part of the city.

Aside from reggae, Jamaica's main attraction, the capital city of Kingston abounds in other attractions of cultural, historical, religious and architectural importance. There are many urban parks with monuments to historic personalities, such as the National Heroes' Park and the St William Grant Park in the heart of downtown, which are often used to accommodate various events on the...  view more