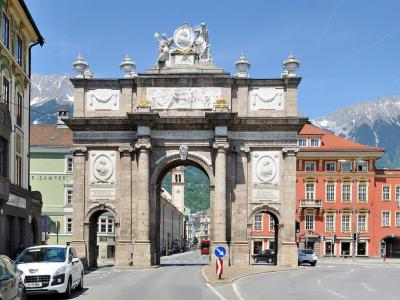 It was August, 1765. Archduke Leopold was getting married. Everything was arranged. He was marrying Spanish Princess Maria Luisa. This would be a big event. Leopold was the second son of Empress Maria Theresia and Holy Roman Emperor, Francis Stephen of Lorraine. They exchanged vows on 18 August. Only days after the ceremony, Emperor Francis Stephen died.

This certainly cast a pall over things. A triumphal arch was being built for the wedding. And it wasn't the usual wooden triumphal arch. No, it had to be stone. How to memorialize a wedding and the passing of the emperor with one stone arch?

Simple, put a memorial motif for the married couple on the south side of the arch. The Emperor would have the north side. The arch was built using ashlar stones from the Medieval city gate demolished for the occasion. The builders were Constantin Walter and Johann Baptist Hagenauer. The relief memorial plaques were in stucco.

Besides the the reliefs of the wedding and the Emperor's memorial, the arch is covered with other adornments. There is the archducal hat bearing the Order of the Golden Fleece; the crown of the Hungarian Order of St. Stephen; a relief of the Empress and Francis Stephen wearing laurels; and portraits of the Duke and Duchess of Lorraine.

The arch closely resembles an old Roman triumphal arch. It is located at the south end of Maria-Theresien Street, formerly the exit road from the old city.
Image Courtesy of Wikimedia and Taxiarchos228.