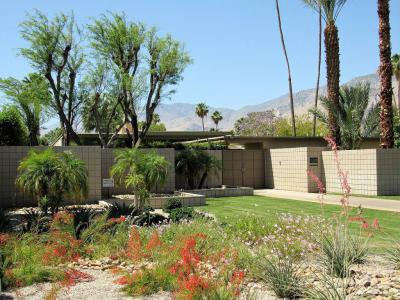 Designed by then-still-unknown Mid-century Modern architect E. Stewart Williams, this long and low structure became the unofficial prototype for much of the construction that followed in the desert oasis of Palm Springs. Despite being Williams's first designed home, privately commissioned by Frank Sinatra after he had made his first million dollars, he knew exactly what worked in a desert environment and what didn't. Although initially Sinatra had his sights set on a Georgian-style mansion with several stories, the architect patiently guided him in the direction of something more daring and appropriate to living in California's sometimes harsh climatic conditions.

With guest quarters at 4,500 square feet and post-war Hollywood glamour at full throttle, this house soon became the scene of countless star-studded, cocktail-flowing parties. It is even rumored that the famous crooner would put up a flag in front of the property, so that neighbors would know when to come by for a drink (how very neighborly!).

Despite Sinatra's occupying the place for no more than 10 years, remnants of his personality remain here to this day – from the grand piano-shaped swimming pool to the well-represented train collection and the numerous celebrity portraits lining the walls (two of which are of Marilyn Monroe).
Image Courtesy of Wikimedia and Farragutful.

Since the early 1930s, Palm Springs has been a favorite desert oasis for the Hollywood elite. With its excellent winter and springtime weather, fabulous shopping, and beautiful overall ambiance, this place offered celebrities a convenient escape from clamoring photographers and newspaper gossips. Behind the private walls of homes, bungalows, and hotels – or sometimes even in the city's...  view more