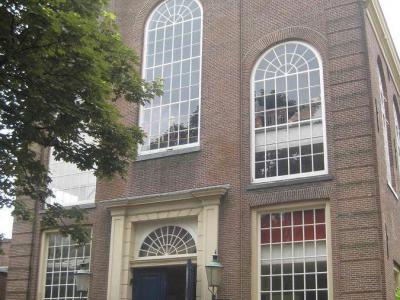 The Uilenburger Synagogue (Uilenburgersjoel) is a typical detached synagogue in the heart of the Jewish Quarter of Amsterdam. It was built in the Louis XV style in 1766 for the Ashkenazi Jews with an aim to replace another house of prayer from 1724, consisting of two floors.

A party room, which later served as a kosher poultry slaughterhouse, could be found on the ground floor, with the actual synagogue now located above it. Adorning the elegant building are the round windows with the Star of David.

The building has been protected as a national monument since 1970. It was extensively restored twice, in 1996 and 2015. The progressive Jewish community of Beit Ha'Chidush (BHC) has been meeting here several times a month since 1997.

Synagogue services, music performances, and other gatherings organized by the congregation take place regularly. There are typically three Shabbat services each month: two on Friday evenings and one on Saturday morning, as well as services on Holidays.

Note:
BHC is an independent modern and progressive community where anyone with a Jewish background, either paternal or maternal, is welcome. People with a non-Jewish partner are more than welcome to attend the services together with their partner. BHC is a community based on equality and inclusiveness, and welcomes individuals of all genders and sexual orientations.
Image by Marion Golsteijn on Wikimedia under Creative Commons License.