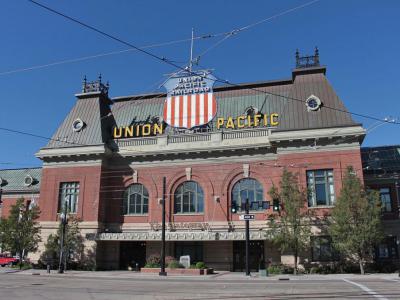 The Salt Lake City Union Pacific Depot is a spacious building on the western edge of downtown Salt Lake City. Built from 1908 to 1909, it harkens back to a more prosperous era in the history of American railroad travel. The sandstone building was constructed in the French Second Empire style and includes a terazzo floor and stained glass windows. One ceiling mural by San Francisco artist Harry Hopp depicts the driving of the Golden Spike north of Salt Lake City at "Promontory Summit" signifying the completion of the first transcontinental railroad in 1869. Another mural by San Francisco artist John McQuarrie shows the 1847 arrival of Mormon pioneers to what is now Salt Lake City. Several side rooms were originally used for separate male and female waiting areas. In January 2006, three floors of the old Union Pacific Depot re-opened as a restaurant and music venue, fittingly called The Depot.
Image by BigBen212 on Wikimedia under Creative Commons License.
Sight description based on wikipedia