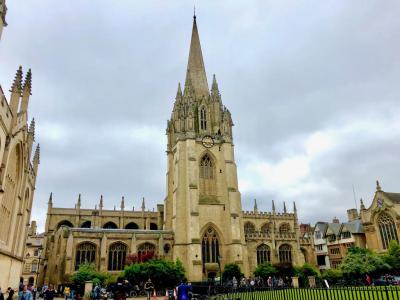 University Church of St. Mary the Virgin, Oxford (must see)

The University Church of St Mary the Virgin is the largest parish church in Oxford. It stands on High Street and is surrounded by colleges, which is why it is so popular with the students and professors.

The first church on this site was built in 1086 and when the university was founded in the 13th century, it was considered to be its first building. In 1320, a two-storey edifice was constructed on the north side of the chancel; the ground floor was the university’s Convocation House and today it houses Vault Café. The upper floor became the university’s first library, with books donated by Thomas Cobham.

The church’s Baroque porch was designed by Nicholas Stone. Its 13th century tower affords excellent views, and is open to the public. The steeple is reputed to be the most beautiful in England.

In 1555, the Oxford Martyrs were tried and condemned inside this church. You will notice that a section of the pillar opposite the pulpit is missing. This was cut out to support a small platform where the former Archbishop of Canterbury, Thomas Cranmer, stood while withdrawing his recantation of his Protestant faith, before being taken out and burnt at the stake.

At the end of the 15th and the early 16th centuries, most of the church was rebuilt in the Perpendicular style, only the tower and the spire remained untouched. Out of the 12 statues, 11 were replaced in 1894 by George Frampton.

Into the 17th century, the church was used for graduation ceremonies, until the church officials got fed up with the very un-Christian parties held afterwards, and therefore they had the Sheldonian Theatre built to host the ceremonies instead.
Image by Andy Montgomery on Flickr under Creative Commons License.