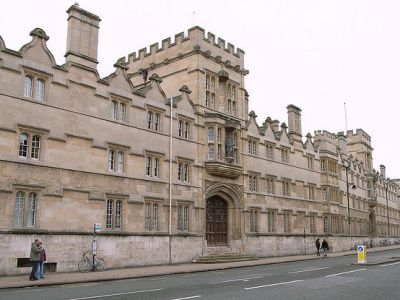 Many of Oxford University’s colleges like to claim to be the oldest, but in truth the prize goes to University College, whose main entrance is on the High Street. According to legend, King Alfred (of the burnt cakes fame) founded the college in 872. In reality, however, the first foundations were laid in 1249, funded with the money left for this purpose by William of Durham.

Sadly, very little of the medieval buildings remains today, replaced in the 17th century with the foundations of the Main Quad, laid in 1634. The English Civil War interrupted work and the quad was finished only in 1676. The Radcliffe Quad was built in 1719, the New Building in 1842, and the Library in 1861.

The college is separated by the cobble-stoned Logic Lane, which has a short covered bridge over the High Street entrance. On the eastern side of the lane you will find the students’ lodgings, and on the western side – the Library, the Hall, the Chapel and the college’s two quads.

University College is associated with a number of influential people. Among its notable alumni there are: Clement Attlee – British Prime Minister (1945-1951); Harold Wilson – British Prime Minister (1964-1970, 1974-1976); Bill Clinton – 42nd President of the United States (1993-2001); Stephen Hawking – English theoretical physicist, cosmologist, and author; C. S. Lewis – British writer and lay theologian, best known as the author of “The Chronicles of Narnia”; and Percy Bysshe Shelley – one of the major English Romantic poets, widely regarded as one of the greatest lyric and philosophical poets in the English language.

In 1892, a small domed room was built by Basil Chambers to house the Shelley Memorial. The statue of the great poet lying dead on an Italian beach was commissioned by Lady Shelley and sculpted by Edward Ford. The room was once filled with water and goldfish for a joke, and the Rector had to have railings put around the statue to stop students from painting Shelley’s private parts in bright colors. The solution for removing the paint was causing the marble to dissolve...
Image by stevecadman on Flickr under Creative Commons License.
Sight description based on wikipedia