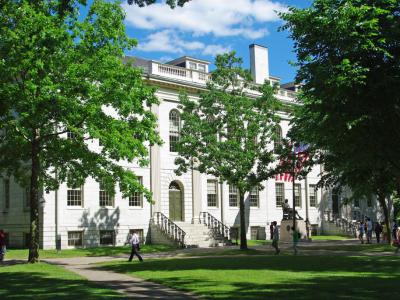 University Hall is a striking building. The neoclassical design is large, imposing, and symmetrical. It's built from white granite, a departure from the red brick designs used in Massachusetts Hall and Harvard Hall. The building has been designated a National Historical Landmark.

Architect Charles Bulfinch designed University Hall. It was built between 1813 and 1815.

The bronze statue of John Harvard, designed by Daniel Chester French, was moved to the western facade of University Hall in 1924.

In 1638, John Harvard, a clergyman, was on his deathbed. He made a bequest towards the school or college being proposed by the Massachusetts Bay Colony. The bequest consisted of 780 pounds sterling and a 400-volume library. The bequest was so inspirational that when the college was founded, it bore his name. No likeness of John Harvard exists, so when French designed the statue, he used descendants to recreate an assumed likeness. The statue was unveiled in 1884.

Tour guides sometimes tell tourists that it's good luck to rub the statue's toe; the toe is now gleaming. This is not actually a known tradition. However, it is traditional for graduating seniors to remove their caps as they pass the statue on the way to their commencement.
Image by Bostonian13 on Wikimedia under Creative Commons License.